Sister Marianne Poole recently celebrated 60 years as a Sister of the Blessed Sacrament. Her journey as an educator has taken her through inner-city schools in New Orleans, Philadelphia, Cleveland, Washington, DC, Harlem, and Santa Fe. She’s visited the Caribbean, the Baltics, Greece, and Italy. Sr. Marianne currently works at Smithson Craighead Academy, a charter school in Tennessee, as a teacher’s aide. “It’s a delight,” she said. “I get a chance to work with the children, help them, listen to them. You know, the whole idea is that you’re there for them. As long as I can be part of these children’s lives, I want to be.”

Sr. Marianne entered the Sisters of the Blessed Sacrament because she was so enthralled with the diversity of the congregation, the commitment, and the joy. “You always feel it’s a path. What is God calling you to? And you listen. So, I listened and I’ve been totally blessed. It’s been 60 years of, I have to admit, a good time. I’ve met wonderful people. I’ve had an experience of going all over the world.”

After working a year in the private sector, Sr. Marianne took her first steps into religious life and entered the Congregation in 1961. She professed her final vows in 1969. She said one of the great highlights of her life was being in Rome for the canonization of St. Katharine on October 1, 2000.

“In Rome, you walked around, and you met people that you worked with in New Orleans, in Philadelphia, in Cleveland; people from Xavier University, and everybody was associated with St. Katharine. So, there was this camaraderie around her and her mission and spirit.”

From the age of seven, Sr. Elena Henderson, SBS, RN, ACSW, LCSW, knew she was going to be a nun. 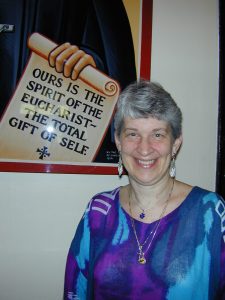 Answering ‘the call’ has been an amazing adventure that she never imagined. Below are just some of her ministries as an SBS.

Her first mission was at a clinic in Harlem in the late ’70s. She continued her ministry with S.O.M.E. (So Others Might Eat), initially to help work on the team from groundbreaking the home to moving in residents in Washington, DC. The facility was filled in one month and continues to operate today.

When she left this program, her next ministry was the Nurse/Counselor at People With Hope with an HIV population. Oh, the stories she could tell! People died and suffered, yet, it holds some of the fondest memories of laughter and joy she experienced in any ministry.

During this time, she was working on a committee to look at the reuse of the historical SBS Virginia property where two schools were operated for Black and Native Americans until the ’70s. She worked with four other Sisters there to establish FrancisEmma, Inc. to preserve and protect the land.

Sr. Elena’s current ministry began in January 2007 with Bon Secours Hospital System in Virginia. She continues to minister with Bon Secours Mercy Health and St. Mary’s Hospital with the primary focus of visiting Catholic patients and families to make sure they have access to the Sacraments, spiritual assessments, and support as needed. 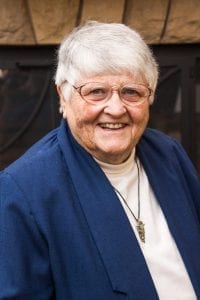 From childhood, Sr. Annette O’Donnell was made aware of the lives of missionaries. Her uncle was a Dominican priest and was ministering in China. Her parents were active in fundraising for the missions. When she first felt called to give herself to the Lord as a Religious, Annette chose the Sisters of St. Joseph of Boston, because she had those Sisters in school and admired their prayerfulness and dedication.

As a Sister of St. Joseph, Sr. Annette taught middle school for 15 years between 1956-1971. She enjoyed coordinating the Eucharistic Crusade Movement, where children would study the Sunday Gospel, observe the Lord, and choose to imitate him in some way.

In 1984, Sr. Annette was feeling called to work with Native Americans, and In God’s providence, she found St. Catherine Indian School. She taught at the school until 1987, when her spiritual director, and the two communities, discerned that she had a second calling to be a Sister of the Blessed Sacrament. It was during this transition period that Sr. Annette asked to have an experience in the Black community. She was missioned to Xavier University, working in the Writing Center and assisting in the campus ministry program. At the end of the five-year transition period, Sister made her final vows as an SBS.

While teaching at Xavier University of New Orleans, Sister also began studying for her doctorate. Sister Annette completed her Ed.D. and received an Arizona Community College Certification in several areas. As a result, she taught for 16 years as an adjunct faculty member of Navajo Community College.

Around 2007, having problems with her legs and feet, she went to the Motherhouse for treatment. After some treatment, Sister Annette began working at the Mission Center giving retreat days and workshops, assisting in the Communications Department, and forming a St. Katharine Drexel Faith-sharing Circle, which still meets weekly at Paul’s Run. She also publishes her blog monthly, Companions on a Faith Journey.

Today, with the wonderful new means of communicating the message of Jesus, St. Annette rejoices that she, and others, too, can be missionaries despite limitations. Wearing the joyful smile for which she is well known, Sr. Annette comments, “Praise the Lord!” She is surely proof that when a heart is called to ministry, one always finds a way.

Today the spotlight is on Sister Theresa Chato, a Navajo SBS, who serves in Chinle, Arizona. We recognize Sr. Theresa for her efforts to foster

Sr. Theresa Chato, right, with Madel Veridiano, teach religious education to about 20 elementary and high school students on Sundays via Zoom since the pandemic began.

parish life during a time of social distancing and illness. She is an active minister to the community through volunteering at her local food bank and sharing her love for the Lord with children, parishioners, and community members alike.

Sr. Theresa is the director of religious education at Our Lady of Fatima Parish where she uses social media and video technology as tools to keep the parishioners connected.  She reaches out to provide resources such as virtual Mass, prayers, and reflections for those who cannot make it in person to worship.  Fostering personal relationships with those she encounters is the heart of Sr. Theresa’s mission.