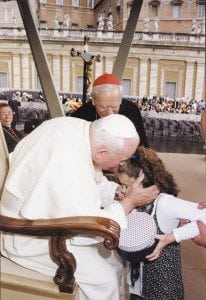 Joy filled this historical moment when a Philadelphia heroine took her place among the Saints of the Catholic Church. Great rejoicing also took place at the SBS Motherhouse and Shrine of Saint Katharine Drexel in Bensalem, Pa., as well as throughout the United States and Haiti.

The process of canonization for Katharine was begun by John Cardinal Krol who officially introduced her Cause in Rome in December 1964. On January 26, 1987, Mother Katharine was declared Venerable.

The Vatican concluded that Robert Gutherman, whose family had prayed solely to Mother Katharine, was miraculously cured of deafness in 1974.

October 1, 2000 saw the culmination of this journey. Several boards investigated a second healing, that of Amy Wall, and concluded that her cure from nerve deafness was truly miraculous.